We saw that our problem was three-fold: physical, emotional, and spiritual. Healing had to come about in all three.

The crucial change in attitude began when we admitted we were powerless, that our habit had us whipped. We came to meetings and withdrew from our habit. For some, this meant no sex with themselves or others, including not getting into relationships. For others it also meant “drying out” and not having sex with the spouse for a time to recover from lust.

We discovered that we could stop, that not feeding the hunger didn’t kill us, that sex was indeed optional! There was hope for freedom, and we began to feel alive. Encouraged to continue, we turned more and more away from our isolating obsession with sex and self and turned to God and others.

All this was scary. We couldn’t see the path ahead, except that others had gone that way before. Each new step of surrender felt it would be off the edge into oblivion, but we took it. And instead of killing us, surrender was killing the obsession! We had stepped into the light, into a whole new way of life.

The fellowship gave us monitoring and support to keep us from being overwhelmed, a safe haven where we could finally face ourselves. Instead of covering our feelings with compulsive sex, we began exposing the roots of our spiritual emptiness and hunger. And the healing began.

As we faced our defects, we became willing to change; surrendering them broke the power they had over us. We began to be more comfortable with ourselves and others for the first time without our “drug.”

Forgiving all who had injured us, and without injuring others, we tried to right our own wrongs. At each amends more of the dreadful load of guilt dropped from our shoulders, until we could lift our heads, look the world in the eye, and stand free.

We began practicing a positive sobriety, taking the actions of love to improve our relations with others. We were learning how to give; and the measure we gave was the measure we got back. We were finding what none of the substitutes had ever supplied. We were making the real Connection. We were home.

The next best thing to actually being there. Entire conference recordings available for online listening. 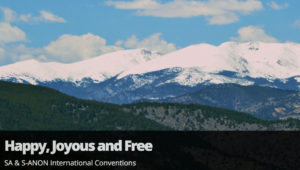 What is Sexaholics Anonymous? What is a Sexaholic and What is Sexual Sobriety? Learn more.